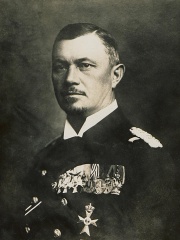 Carl Friedrich Heinrich Reinhard Scheer (30 September 1863 – 26 November 1928) was an Admiral in the Imperial German Navy (Kaiserliche Marine). Scheer joined the navy in 1879 as an officer cadet and progressed through the ranks, commanding cruisers and battleships, as well as senior staff positions on land. At the outbreak of World War I, Scheer was the commander of the II Battle Squadron of the High Seas Fleet. Read more on Wikipedia

Reinhard Scheer was a German naval officer who served as the chief of the admiralty staff of the German Imperial Navy during World War I. He was most famous for his role in the Battle of Jutland, where he advocated for a fleet engagement with the British Royal Navy.

Among military personnels, Reinhard Scheer ranks 383 out of 1,468. Before him are Omar Pasha, Georges Picquart, Günther Rall, Prokop the Great, Gerhard von Scharnhorst, and Leonid Govorov. After him are Nicolas Chauvin, Ban Chao, Alfred I, Prince of Windisch-Grätz, Vasily Sokolovsky, Nikolai Kuznetsov, and William Tecumseh Sherman.