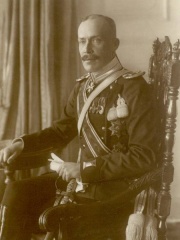 Prince Wilhelm of Wied (German: Wilhelm Friedrich Heinrich Prinz zu Wied, 26 March 1876 – 18 April 1945), reigned briefly as sovereign of the Principality of Albania as Vilhelm I from 7 March to 3 September 1914, when he left for exile. His reign officially came to an end on 31 January 1925, when the country was declared an Albanian Republic. Outside the country and in diplomatic correspondence, he was styled "sovereign prince", but in Albania, he was referred to as mbret, or king. Read more on Wikipedia

Wied, Prince of Albania, was the last ruler of the Principality of Albania.

Page views of Wied, Prince of Albanias by language

Among politicians, Wied, Prince of Albania ranks 2,676 out of 15,710. Before him are Emperor Kōan, Anders Fogh Rasmussen, Heonjong of Joseon, Georg Michaelis, Alfonso III of Asturias, and Princess Irene of Greece and Denmark. After him are Kolinda Grabar-Kitarović, Alexios I of Trebizond, Violant of Hungary, Armand-Emmanuel de Vignerot du Plessis, Duc de Richelieu, Valdas Adamkus, and Francis III, Duke of Brittany.