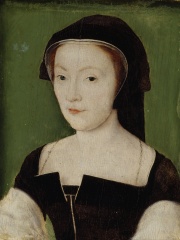 Mary of Guise (French: Marie de Guise; 22 November 1515 – 11 June 1560), also called Mary of Lorraine, was a French noblewoman of the House of Guise, a cadet branch of the House of Lorraine and one of the most powerful families in France. She was Queen of Scotland from 1538 until 1542, as the second wife of King James V. As the mother of Mary, Queen of Scots, she was a key figure in the political and religious upheaval that marked mid-16th-century Scotland, ruling the kingdom as regent on behalf of her daughter from 1554 until her death in 1560. The eldest of the twelve children born to Claude, Duke of Guise, and Antoinette of Bourbon, in 1534 Mary was married to Louis II d'Orléans, Duke of Longueville, the Grand Chamberlain of France. Read more on Wikipedia

Mary of Guise was a Scottish noblewoman and queen consort of France, as the second wife of King Francis II. She was the mother of Mary, Queen of Scots.

Page views of Mary of Guises by language

Among politicians, Mary of Guise ranks 2,001 out of 15,577. Before her are Jeongjong, 3rd monarch of Goryeo, Boniface I, Marquess of Montferrat, Andrew I of Hungary, Gennady Yanayev, Afonso IV of Portugal, and Pang Tong. After her are Al-Kamil, Gennady Zyuganov, James Callaghan, Tiglath-Pileser III, Constans, and Biljana Plavšić.

Among people born in 1515, Mary of Guise ranks 7. Before her are Şehzade Mustafa, Teresa of Ávila, Anne of Cleves, Philip Neri, Lucas Cranach the Younger, and Injong of Joseon. After her are Piali Pasha, Pierre Lescot, Petrus Ramus, Felix of Cantalice, Sebastian Castellio, and Cipriano de Rore. Among people deceased in 1560, Mary of Guise ranks 6. Before her are Francis II of France, Gustav I of Sweden, Philip Melanchthon, Andrea Doria, and Anastasia Romanovna. After her are Imagawa Yoshimoto, Bartolommeo Bandinelli, Joachim du Bellay, Jan Mandijn, Melchor Cano, and Nicolas Gombert.