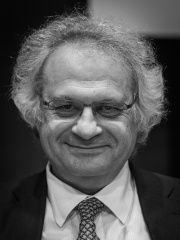 Amin Maalouf (French: [maluf]; Arabic: أمين معلوف‎; born 25 February 1949) is a Lebanese-born French author who has lived in France since 1976. Although his native language is Arabic, he writes in French, and his works have been translated into over 40 languages. Of his several works of nonfiction, The Crusades through Arab Eyes is probably the best known. Read more on Wikipedia

Amin Maalouf is most famous for his novel, "The Rock of Tanios."

Among writers, Amin Maalouf ranks 725 out of 5,794. Before him are Georgiana Cavendish, Duchess of Devonshire, Neal Cassady, Lesya Ukrainka, Sin Saimdang, Vittoria Colonna, and Cornelia, mother of the Gracchi. After him are Curzio Malaparte, Faxian, Jean de La Bruyère, John Fante, Cesare Pavese, and Epicharmus of Kos.

Among WRITERS In Lebanon