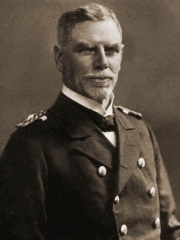 Maximilian Johannes Maria Hubert Reichsgraf von Spee (22 June 1861 – 8 December 1914) was a naval officer of the German Kaiserliche Marine (Imperial Navy), who commanded the East Asia Squadron during World War I. Spee entered the navy in 1878 and served in a variety of roles and locations, including on a colonial gunboat in German West Africa in the 1880s, the East Africa Squadron in the late 1890s, and as commander of several warships in the main German fleet in the early 1900s. During his time in Germany in the late 1880s and early 1890s, he married his wife, Margareta, and had three children, his sons Heinrich and Otto and his daughter Huberta. Read more on Wikipedia

Maximilian von Spee was a German naval officer who commanded the German East Asia Squadron. He was most famous for his victory in the Battle of the Falkland Islands in 1914.

Among MILITARY PERSONNELS In Denmark

Among military personnels born in Denmark, Maximilian von Spee ranks 1. After him are Adam Ludwig Lewenhaupt (1659) and Søren Kam (1921).