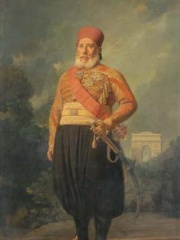 Ibrahim Pasha (Turkish: Kavalalı İbrahim Paşa; Arabic: إبراهيم باشا‎ Ibrāhīm Bāshā; 1789 – November 10, 1848) was a general in the Egyptian army and the eldest son of Muhammad Ali, the Wāli and unrecognised Khedive of Egypt and Sudan. He served as a general in the Egyptian army that his father established during his reign, taking his first command of Egyptian forces when he was merely a teenager. In the final year of his life, he succeeded his still living father as ruler of Egypt and Sudan, due to the latter's ill health. Read more on Wikipedia

Ibrahim Pasha of Egypt was most famous for being the son of Muhammad Ali, who ruled Egypt from 1805 to 1848. Ibrahim Pasha succeeded his father as ruler of Egypt in 1848 and ruled until 1854.

Page views of Ibrahim Pasha of Egypts by language

Among politicians, Ibrahim Pasha of Egypt ranks 1,216 out of 15,710. Before him are Alexander I of Serbia, Ottokar II of Bohemia, Sejo of Joseon, Fuxi, Princess Ludovika of Bavaria, and Napoléon, Prince Imperial. After him are Baldwin I, Latin Emperor, Philippikos Bardanes, Ephialtes of Trachis, Humayun, 2nd Dalai Lama, and Frank-Walter Steinmeier.