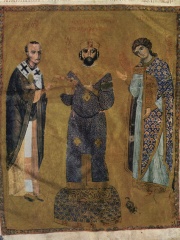 Nikephoros III Botaneiates, Latinized as Nicephorus III Botaniates (Greek: Νικηφόρος Βοτανειάτης, 1002–1081), was Byzantine emperor from 7 January 1078 to 1 April 1081. He was born in 1002, and became a general during the reign of Byzantine Emperor Constantine IX Monomachos, serving in the Pecheneg revolt of 1048–1053. His actions in guiding his forces away from the Pechenegs following the Battle of Zygos Pass, in which they suffered eleven days of harassment before finally reaching the Byzantine city of Adrianople, attracted the attention of fellow officers, and he received the title of magistros as a reward. Read more on Wikipedia

Nikephoros III Botaneiates was most famous for his defeat of the Bulgarians in the Battle of Kleidion in 1014.

Among politicians, Nikephoros III Botaneiates ranks 928 out of 15,710. Before him are Andrei Gromyko, Augustus III of Poland, Feodor III of Russia, Lentulus Batiatus, Carol II of Romania, and Ferdinand VII of Spain. After him are Alberto Fujimori, Ferdinand I of the Two Sicilies, Emperor Yao, Saud of Saudi Arabia, Taejong of Joseon, and Islam Karimov.