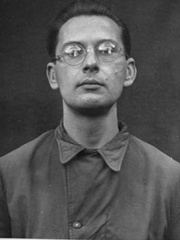 Rudolf Hermann Brandt (2 June 1909 – 2 June 1948) was a German SS officer from 1933–45 and a civil servant. A lawyer by profession, Brandt was the Personal Administrative Officer to Reichsführer-SS (Persönlicher Referent vom Reichsführer SS) Heinrich Himmler and a defendant at the Doctors' Trial at Nuremberg for his part in securing the 86 victims of the Jewish skull collection, an attempt to create an anthropological display of plaster body casts and skeletal remains of Jews. He was convicted of war crimes and crimes against humanity, and executed in 1948. Read more on Wikipedia

Among politicians, Rudolf Brandt ranks 4,395 out of 15,577. Before him are Princess Olga of Greece and Denmark, Émile Lahoud, Leontios, Philipp Bouhler, Dardanus, and Vicente Guerrero. After him are Tage Erlander, Jia Xu, Theobald II, Count of Champagne, Charles Alexandre de Calonne, Prayut Chan-o-cha, and Drusus Caesar.