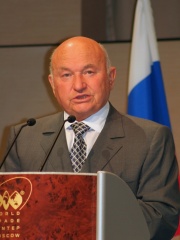 Yury Mikhailovich Luzhkov (Russian: Ю́рий Миха́йлович Лужко́в, IPA: [ˈjʉrʲɪj mʲɪˈxajləvʲɪtɕ lʊˈʂkof]; 21 September 1936 – 10 December 2019) was a Russian politician who served as mayor of Moscow from 1992 to 2010. He was the vice-chairman and one of the founders of the ruling United Russia party.During Luzhkov's time, Moscow's economy expanded and he presided over large construction projects in the city, including the building of a new financial district. At the same time, he was accused of corruption, bulldozing historic buildings, and poor handling of traffic, as well as the city's smog crisis during the 2010 Russian wildfires. Read more on Wikipedia

Among politicians, Yury Luzhkov ranks 4,403 out of 15,710. Before him are Micipsa, Eduardo Frei Montalva, Nouri al-Maliki, Bardylis, Arbogast, and Emperor Seinei. After him are Manius Curius Dentatus, Cypselus, Caroline Kennedy, Lothar von Richthofen, Cus D'Amato, and Konstantinos Mitsotakis.