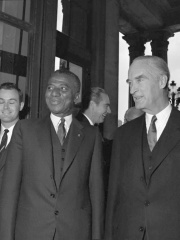 Alfried Felix Alwyn Krupp von Bohlen und Halbach (13 August 1907 – 30 July 1967), often referred to as Alfried Krupp, was a German industrialist, a competitor in Olympic yacht races, and a member of the Krupp family, which has been prominent in German industry since the early 19th century. He was convicted after World War II of crimes against humanity for the genocidal manner in which he operated his factories (with the use of slave labor) and sentenced to twelve years in prison subsequently commuted to three years with time served in 1951.The family company, known formally as Friedrich Krupp AG Hoesch-Krupp, was a key supplier of weapons and materiel to the German Government and the Wehrmacht during World War II. In 1943, Krupp became sole proprietor of the company, following the Lex Krupp ("Krupp Law") decreed by Adolf Hitler. Krupp's wartime employment of slave labor resulted in the "Krupp Trial" of 1947–1948, following which he served three years in prison. Read more on Wikipedia

Among politicians, Alfried Krupp von Bohlen und Halbach ranks 4,352 out of 15,577. Before her are Euphronios, Amyntas I of Macedon, Kiril, Prince of Preslav, Etana, Louis Jean Marie de Bourbon, Duke of Penthièvre, and Ranjit Singh. After her are Anne of Austria, Landgravine of Thuringia, Max Amann, Auguste, Duke of Leuchtenberg, Yury Luzhkov, Allen Dulles, and Isabella of Valois.