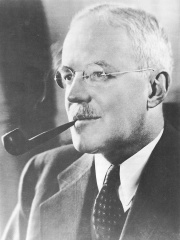 Allen Welsh Dulles (, ; April 7, 1893 – January 29, 1969) was the first civilian Director of Central Intelligence (DCI), and its longest-serving director to date. As head of the Central Intelligence Agency (CIA) during the early Cold War, he oversaw the 1953 Iranian coup d'état, the 1954 Guatemalan coup d'état, the Lockheed U-2 aircraft program, the Project MKUltra mind control program and the Bay of Pigs Invasion. He was fired by John F. Kennedy over the latter fiasco. Dulles was one of the members of the Warren Commission investigating the assassination of John F. Read more on Wikipedia

Allen Dulles was the director of the CIA from 1953 to 1961. He is most famous for overseeing the CIA's failed Bay of Pigs invasion in 1961, and for his involvement in the Cuban Missile Crisis.

Among politicians, Allen Dulles ranks 4,357 out of 15,577. Before him are Ranjit Singh, Alfried Krupp von Bohlen und Halbach, Anne of Austria, Landgravine of Thuringia, Max Amann, Auguste, Duke of Leuchtenberg, and Yury Luzhkov. After him are Isabella of Valois, Bayan I, Armin Laschet, Zhao Tuo, Hor, and Ordoño II of León.