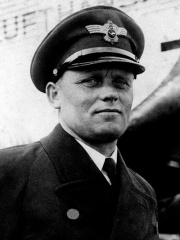 Hans Baur (19 June 1897–17 February 1993) was Adolf Hitler's pilot during Hitler's political campaigns of the early 1930s. He later became Hitler's personal pilot and leader of the Reichsregierung squadron. Apprehended by the Soviet Union at the end of World War II in Europe, he was imprisoned in the USSR for ten years before being extradited to France on 10 October 1955, where he was imprisoned until 1957. Read more on Wikipedia

Hans Baur was a German aviator and SS officer. He was a flight instructor for the Luftwaffe, and served as Adolf Hitler's personal pilot. He was also a close friend of Hermann Göring.

Among military personnels, Hans Baur ranks 452 out of 1,466. Before him are Conon, Nicolas Chauvin, Saburō Sakai, Gustav Horn, Count of Pori, Aegidius, and Gongsun Zan. After him are Vjekoslav Luburić, Harold Alexander, 1st Earl Alexander of Tunis, He Jin, Alfred Redl, Huang Gai, and William Westmoreland.