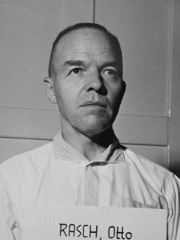 Emil Otto Rasch (7 December 1891 – 1 November 1948) was a high-ranking German Nazi official and Holocaust perpetrator, who commanded Einsatzgruppe C in northern and central Ukraine until October 1941. After World War II, Rasch was indicted for war crimes at the Einsatzgruppen trial, but the case was discontinued for medical reasons in 1948. Read more on Wikipedia

Otto Rasch is most famous for his work on the Rasch model of measurement. The Rasch model is a measurement model that is used to measure the difficulty of an item and the ability of the person taking the test.

Among politicians, Otto Rasch ranks 4,383 out of 15,577. Before him are Jean-Pierre Boyer, James FitzJames, 1st Duke of Berwick, Haitham bin Tariq, Bohemond II of Antioch, Herod II, and Andreas Palaiologos. After him are Ludovico Manin, Edigu, Archduchess Marie Caroline of Austria, Ferdinand, Duke of Viseu, Jan Smuts, and Princess Olga of Greece and Denmark.