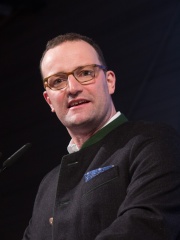 Jens Georg Spahn (born 16 May 1980) is a German politician who served as Federal Minister of Health in the fourth cabinet of Chancellor Angela Merkel from 2018 to 2021. A member of the centre-right Christian Democratic Union (CDU), he has been the member of the lower house of the federal parliament, the Bundestag (German: Mitglied des Deutschen Bundestages, MdB), for Steinfurt I – Borken I since 2002. At the time of his election in 2002, Spahn – at age 22 – was the youngest member of the CDU in the German parliament. Read more on Wikipedia