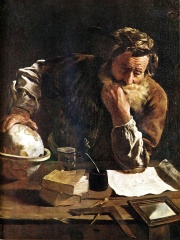 Archimedes of Syracuse (; c. 287 – c. 212 BC) was a Greek mathematician, physicist, engineer, astronomer, and inventor from the ancient city of Syracuse in Sicily. Although few details of his life are known, he is regarded as one of the leading scientists in classical antiquity. Considered to be the greatest mathematician of ancient history, and one of the greatest of all time, Archimedes anticipated modern calculus and analysis by applying the concept of the infinitely small and the method of exhaustion to derive and rigorously prove a range of geometrical theorems, including: the area of a circle; the surface area and volume of a sphere; area of an ellipse; the area under a parabola; the volume of a segment of a paraboloid of revolution; the volume of a segment of a hyperboloid of revolution; and the area of a spiral.Archimedes' other mathematical achievements include deriving an approximation of pi; defining and investigating the spiral that now bears his name; and devising a system using exponentiation for expressing very large numbers. Read more on Wikipedia

Archimedes is most famous for discovering the law of buoyancy and inventing the screw pump.

Page views of Archimedes by language

Others Deceased in 212 BC