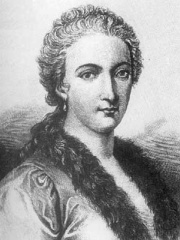 Maria Gaetana Agnesi (UK: an-YAY-zee, US: ahn-, Italian: [maˈriːa ɡaeˈtaːna aɲˈɲeːzi, -ɲɛːz-]; 16 May 1718 – 9 January 1799) was an Italian mathematician, philosopher, theologian, and humanitarian. She was the first woman to write a mathematics handbook and the first woman appointed as a mathematics professor at a university.She is credited with writing the first book discussing both differential and integral calculus and was a member of the faculty at the University of Bologna, although she never served. She devoted the last four decades of her life to studying theology (especially patristics) and to charitable work and serving the poor. Read more on Wikipedia

Maria Gaetana Agnesi was an Italian mathematician and philosopher. She is most famous for her 1748 publication Instituzioni analitiche ad uso della gioventù italiana (Analytical Institutions for the Use of Italian Youth), which is considered the first modern textbook on calculus.