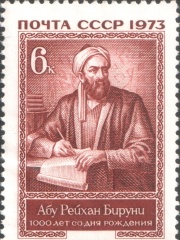 Abu Rayhan al-Biruni (973 – after 1050) was an Iranian scholar and polymath during the Islamic Golden Age. He has been variously called as the "founder of Indology", "Father of Comparative Religion", "Father of modern geodesy", and the first anthropologist.Al-Biruni was well versed in physics, mathematics, astronomy, and natural sciences, and also distinguished himself as a historian, chronologist and linguist. He studied almost all fields of science and was compensated for his research and strenuous work. Read more on Wikipedia

Since 2007, the English Wikipedia page of Al-Biruni has received more than 1,256,419 page views. His biography is available in 84 different languages on Wikipedia making him the 14th most popular mathematician.

Page views of Al-Birunis by language

Among MATHEMATICIANS In Uzbekistan