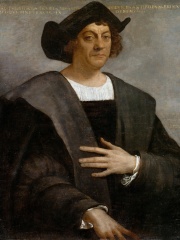 Christopher Columbus (it, lij, ; born between 25 August and 31 October 1451, died 20 May 1506) was an explorer and navigator from Genoa (now part of Italy) who completed four voyages across the Atlantic Ocean, opening the way for the wide-scale European exploration and colonization of the Americas. His expeditions, sponsored by the Catholic Monarchs of Spain, are the first known European contact with the Caribbean, Central America, and South America, and the second widely accepted European contact with the Americas after the Norse colonization of North America five centuries earlier. Scholars generally agree that Columbus was born in the Republic of Genoa and spoke a dialect of Ligurian as his first language. Read more on Wikipedia

Christopher Columbus is most famous for discovering the Americas in 1492.

Among people born in 1451, Christopher Columbus ranks 1. After him are Isabella I of Castile, Muhammad Shaybani, James III of Scotland, René II, Duke of Lorraine, Frederick of Naples, Isabel Neville, Duchess of Clarence, Kemal Reis, Nicolás de Ovando, and Franchinus Gaffurius. Among people deceased in 1506, Christopher Columbus ranks 1. After him are Philip I of Castile, Andrea Mantegna, Yeonsangun of Joseon, Anne of Foix-Candale, Alexander Jagiellon, Sultan Husayn Bayqara, Sesshū Tōyō, Alexander Agricola, João I of Kongo, and Beatriz, Duchess of Viseu.