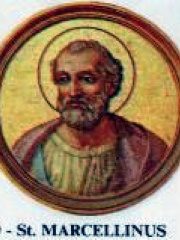 Pope Marcellinus was the bishop of Rome from 30 June 296 to his death in 304. A historical accusation was levelled at him by some sources to the effect that he might have renounced Christianity during Emperor Diocletian's persecution of Christians before repenting afterwards, which would explain why he is omitted from lists of martyrs. The accusation is rejected, among others, by Augustine of Hippo. Read more on Wikipedia

Pope Marcellinus was most famous for being the first pope to be martyred. He was killed during the persecutions of emperor Diocletian.

Among religious figures, Pope Marcellinus ranks 557 out of 2,238. Before him are Pope Benedict V, Pope Agapetus I, Paul the Deacon, Ibn Hisham, Anne Catherine Emmerich, and Rabanus Maurus. After him are Clotilde, John of Capistrano, Justin Martyr, Pope Victor II, Saint Walpurga, and Pope Boniface II.