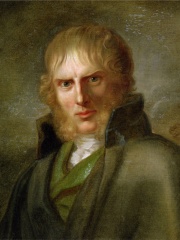 Caspar David Friedrich (5 September 1774 – 7 May 1840) was a 19th-century German Romantic landscape painter, generally considered the most important German artist of his generation. He is best known for his mid-period allegorical landscapes which typically feature contemplative figures silhouetted against night skies, morning mists, barren trees or Gothic ruins. His primary interest was the contemplation of nature, and his often symbolic and anti-classical work seeks to convey a subjective, emotional response to the natural world. Read more on Wikipedia

Since 2007, the English Wikipedia page of Caspar David Friedrich has received more than 1,170,384 page views. His biography is available in 65 different languages on Wikipedia making him the 49th most popular painter.