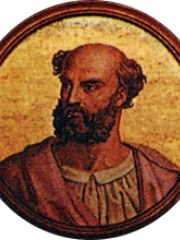 Pope Damasus II (; died 9 August 1048, born Poppo de' Curagnoni) was the head of the Catholic Church and ruler of the Papal States from 17 July 1048 to his death on 9 August that same year. He was the second of the German pontiffs nominated by Emperor Henry III. A native of Bavaria, he was the third German to become pope and had one of the shortest papal reigns.Upon the death of Clement II, envoys from Rome were sent to the emperor to ascertain who should be named pope. Henry named the bishop of Brixen, Poppo de' Curagnoni. Read more on Wikipedia

Pope Damasus II is most famous for his contribution to the development of the Roman Liturgy.

Among religious figures, Pope Damasus II ranks 330 out of 2,238. Before him are Pope Callixtus I, Pope Leo IV, Ubba, Pope Martin I, Sabbatai Zevi, and Pope Nicholas IV. After him are Ephrem the Syrian, James, son of Alphaeus, Barabbas, Philip Neri, Pope Eugene I, and Pope Benedict I.

Among people born in 1000, Pope Damasus II ranks 6. Before him are Pope John XV, Pope Sylvester III, Constantine IX Monomachos, Pope Gregory VI, and Ubba. After him are Parascheva of the Balkans, Pope John XIV, Michael VI Bringas, Antipope Boniface VII, Ivan Vladislav of Bulgaria, and Saint Emeric of Hungary. Among people deceased in 1048, Pope Damasus II ranks 3. Before him are Al-Biruni and Pope Gregory VI. After him are Emperor Jingzong of Western Xia, Adalbert, Duke of Lorraine, Gyda of Sweden, and Wipo of Burgundy.