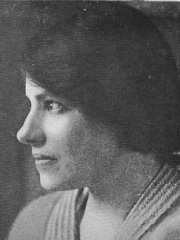 Anna Anderson (16 December 1896 – 12 February 1984) was the best known of several impostors who claimed to be Grand Duchess Anastasia of Russia. Anastasia, the youngest daughter of the last Tsar and Tsarina of Russia, Nicholas II and Alexandra, was murdered along with her parents and siblings on 17 July 1918 by communist revolutionaries in Yekaterinburg, Russia, but the location of her body was unknown until 2007.In 1920, Anderson was institutionalized in a mental hospital after a suicide attempt in Berlin. At first, she went by the name Fräulein Unbekannt (German for Miss Unknown) as she refused to reveal her identity. Read more on Wikipedia

Since 2007, the English Wikipedia page of Anna Anderson has received more than 1,993,972 page views. Her biography is available in 31 different languages on Wikipedia making her the 14th most popular celebrity.

Among CELEBRITIES In Poland