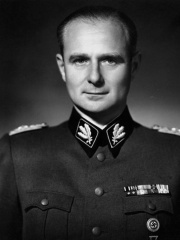 Karl Friedrich Otto Wolff (13 May 1900 – 17 July 1984) was a German SS functionary who served as Chief of Personal Staff Reichsführer-SS (Heinrich Himmler) and an SS liaison to Adolf Hitler during World War II. He ended the war as the Supreme SS and Police Leader in occupied Italy and helped arrange for the early surrender of Axis forces in that theatre, effectively ending the war there several days sooner than in the rest of Europe. He escaped prosecution at the Nuremberg Trials, apparently as a result of his participation in Operation Sunrise. In 1962, Wolff was prosecuted in West Germany for the deportation of Italian Jews, and he was convicted to 15 years in prison for accessory to murder in 1964. Read more on Wikipedia

Karl Wolff was a high-ranking Nazi SS officer who served as a personal adjutant to Adolf Hitler. He was the Commandant of the Nazi concentration camps of Dachau and Sachsenhausen. He was also the chief of the Gestapo in Lyon, France.