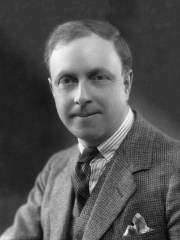 Archibald Joseph Cronin (19 July 1896 – 6 January 1981), known professionally as A. J. Cronin, was a Scottish physician and novelist. His best-known novel The Citadel (1937) tells of a Scottish doctor in a Welsh mining village, who then shoots up the medical ladder in London. Cronin knew both venues, as a medical inspector of mines and as a doctor in Harley Street. Read more on Wikipedia

A. J. Cronin is most famous for his novel The Citadel, which is a fictionalized account of his own experiences as a doctor in the slums of Glasgow, Scotland.

Page views of A. J. Cronins by language

Among writers, A. J. Cronin ranks 544 out of 5,794. Before him are Yevgeny Zamyatin, Arthur Koestler, Bohumil Hrabal, Giuseppe Tomasi di Lampedusa, Salman Rushdie, and Al-Maʿarri. After him are Frantz Fanon, Appius Claudius Caecus, William of Rubruck, Georg Trakl, Natsume Sōseki, and Alain Robbe-Grillet.