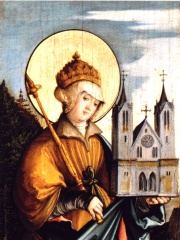 Cunigunde of Luxembourg, OSB (German: Kunigunde) (c. 975 – 3 March 1033), also called Cunegundes, Cunegunda, and Cunegonda and, in Latin, Cunegundis or Kinigundis, was Empress of the Holy Roman Empire by marriage to Holy Roman Emperor Henry II. She ruled as interim regent after the death of her spouse in 1024. Read more on Wikipedia

Among companions, Cunigunde of Luxembourg ranks 171 out of 673. Before her are Helen of Greece and Denmark, Matilda of Flanders, Maud of Wales, Archduchess Maria Johanna Gabriela of Austria, Princess Louise, Duchess of Argyll, and Yevdokiya Lopukhina. After her are Charlotte of Savoy, Olga Constantinovna of Russia, Maria Anna of Austria, Barbara Radziwiłł, Brunhilda of Austrasia, and María Isabella of Spain.

Among companions born in Germany, Cunigunde of Luxembourg ranks 25. Before her are Caroline Augusta of Bavaria (1792), Maria Anna of Neuburg (1667), Elizabeth Alexeievna (1779), Eleanor of Austria, Queen of Poland (1653), Emma of Waldeck and Pyrmont (1858), and Alexandrine of Mecklenburg-Schwerin (1879). After her are Princess Charlotte of Prussia (1860), Matilda of Ringelheim (894), Augusta of Saxe-Weimar-Eisenach (1811), Sophia Charlotte of Hanover (1668), Elisabeth Christine of Brunswick-Wolfenbüttel-Bevern (1715), and Sophia Dorothea of Celle (1666).