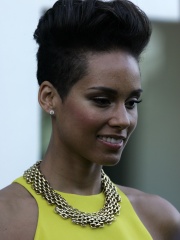 Alicia Augello-Cook Dean (born January 25, 1981), better known by her stage name Alicia Keys, is an American musician, singer, songwriter, actress and philanthropist. A classically-trained pianist, Keys was composing songs by age 12 and was signed at 15 years old by Columbia Records. After disputes with the label, she signed with Arista Records, and later released her debut album, Songs in A Minor, with J Records in 2001. Read more on Wikipedia

Since 2007, the English Wikipedia page of Alicia Keys has received more than 14,510,812 page views. Her biography is available in 77 different languages on Wikipedia making her the 193rd most popular musician.