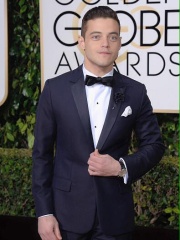 Rami Said Malek (English: ; Arabic: رامي سعيد مالك‎, Egyptian Arabic: [ˈɾɑːmi sæˈʕiːd ˈmæːlek]; born May 12, 1981) is an American actor and producer. He is best known for portraying computer hacker Elliot Alderson in the USA Network television series Mr. Robot (2015–2019), for which he received accolades such as the 2016 Primetime Emmy Award for Outstanding Lead Actor in a Drama Series, and as Queen lead singer Freddie Mercury in the biopic Bohemian Rhapsody (2018), for which he received awards such as the Academy Award, Golden Globe Award, Screen Actors Guild Award, and British Academy Film Award for Best Actor. Read more on Wikipedia

Since 2007, the English Wikipedia page of Rami Malek has received more than 26,134,336 page views. His biography is available in 57 different languages on Wikipedia making him the 803rd most popular actor.