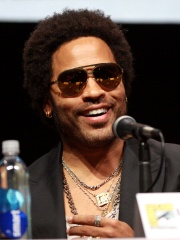 Leonard Albert Kravitz (born May 26, 1964) is an American singer-songwriter, record producer, multi-instrumentalist, and actor. His style incorporates elements of rock, blues, soul, R&B, funk, jazz, reggae, hard rock, psychedelic, pop, folk, and ballads. Kravitz won the Grammy Award for Best Male Rock Vocal Performance four years in a row from 1999 to 2002, breaking the record for most wins in that category and setting the record for most consecutive wins in one category by a male. Read more on Wikipedia

Lenny Kravitz is most famous for his singing career, which has spanned over three decades.