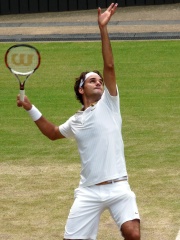 Roger Federer (German: [ˈrɔdʒər ˈfeːdərər]; born 8 August 1981) is a Swiss former professional tennis player. He was ranked world No. 1 by the Association of Tennis Professionals (ATP) for 310 weeks, including a record 237 consecutive weeks, and finished as the year-end No. Read more on Wikipedia

Roger Federer is most famous for being one of the greatest tennis players of all time.

Us Weekly
Roger Federer and Wife Mirka Federer's Relationship Timeline
Love on the court! Roger Federer met his wife, Mirka Federer (née Vavrinec), while they were both playing the sport they love most: tennis. The 20-time Grand Slam winner and the Slovakia native first crossed paths at the 2000 Olympics in Sydney, Australia, wh…
Eliza Thompson
Daily Mail
Roger Federer sends fans into a frenzy after posting a snap with K-Pop sensation Blackpink
The tennis legend posted the picture on his Twitter and his Instagram, suggesting that his kids were fans of the South Korean girl band - who have more than 52million Instagram followers.
Dominic Hogan

Among TENNIS PLAYERS In Switzerland