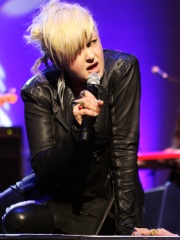 Cynthia Ann Stephanie Lauper (born June 22, 1953) is an American singer, songwriter, actress and activist. Her career has spanned over 40 years. Her album She's So Unusual (1983) was the first debut album by a female artist to achieve four top-five hits on the Billboard Hot 100—"Girls Just Want to Have Fun", "Time After Time", "She Bop", and "All Through the Night"—and earned Lauper the Best New Artist award at the 27th Grammy Awards in 1985. Read more on Wikipedia

Since 2007, the English Wikipedia page of Cyndi Lauper has received more than 8,237,307 page views. Her biography is available in 53 different languages on Wikipedia making her the 166th most popular musician.