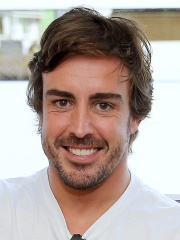 Fernando Alonso Díaz (Spanish pronunciation: [feɾˈnando aˈlonso ˈði.aθ] (listen); born 29 July 1981) is a Spanish racing driver currently competing for Alpine in Formula One. He won the series' World Drivers' Championship in 2005 and 2006 with Renault, and has also driven for McLaren, Ferrari, and Minardi. With Toyota, Alonso won the 24 Hours of Le Mans twice, in 2018 and 2019, and the FIA World Endurance Championship in 2018–19. Read more on Wikipedia

Fernando Alonso is a Spanish Formula One racing driver and a two-time World Champion who is currently racing for McLaren. He is the youngest driver to win a Formula One World Championship, which he achieved at the age of 24 years and 58 days.

Among RACING DRIVERS In Spain