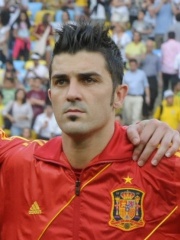 David Villa Sánchez (Spanish pronunciation: [daˈβið ˈbiʎa santʃeθ]; born 3 December 1981) is a Spanish retired professional footballer who played as a striker. Villa is regarded by pundits as one of the best forwards of his generation, and one of the best Spanish strikers of all time. Villa is currently working as the Technical Advisor and Head of Global Football Operations of the Indian Super League club Odisha FC.Nicknamed El Guaje (The Kid in Asturian) due to a reputation of playing football with children much older than him, Villa sustained a serious injury as a child but managed to start his professional career with Sporting de Gijón in 2001. Read more on Wikipedia