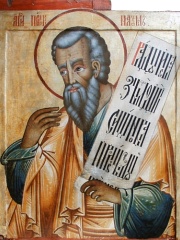 Nahum ( or ; Hebrew: נַחוּם‎ Naḥūm) was a minor prophet whose prophecy is recorded in the Tanakh, also called the Hebrew Bible and The Old Testament. His book comes in chronological order between Micah and Habakkuk in the Bible. Read more on Wikipedia

Nahum is most famous for his prophecy that the city of Nineveh would be destroyed.

Page views of Nahums by language

Among politicians, Nahum ranks 2,053 out of 15,710. Before him are Cleopatra VI of Egypt, Amenemhat IV, Hans Luther, Emperor Renzong of Song, Andrew III of Hungary, and Wilhelmine Amalia of Brunswick-Lüneburg. After him are Dagobert III, Sekhemkhet, Zhu De, Eadwig, Ziying, and Nicolas Fouquet.

Among people born in 600 BC, Nahum ranks 22. Before him are Mardonius, Hippasus, Chilon of Sparta, Thespis, Hippias, and Bias of Priene. After him are Cleomenes I, Yaśodharā, Theano, Datis, Lucius Tarquinius Collatinus, and Hiero I of Syracuse.