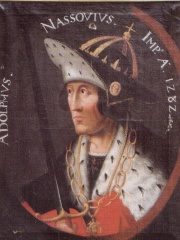 Adolf (c. 1255 – 2 July 1298) was the count of Nassau from about 1276 and the elected king of Germany from 1292 until his deposition by the prince-electors in 1298. He was never crowned by the pope, which would have secured him the imperial title. Read more on Wikipedia

Since 2007, the English Wikipedia page of Adolf of Germany has received more than 94,264 page views. His biography is available in 36 different languages on Wikipedia. Adolf of Germany is the 2,102nd most popular politician (down from 1,620th in 2019).

Adolf Hitler was the leader of the Nazi party and became dictator of Germany in 1933. He is most famous for his attempt to create a "master race" of Aryans by killing Jews, Gypsies, and homosexuals.

Page views of Adolf of Germanies by language

Among people born in 1255, Adolf of Germany ranks 3. Before him are Duccio and Albert I of Germany. After him are Ferdinand de la Cerda, George, Emperor of Trebizond, Andrey of Gorodets, and Dino Compagni. Among people deceased in 1298, Adolf of Germany ranks 2. Before him is Jacobus da Varagine. After him are Mechtilde, Ram Khamhaeng, Yolanda of Poland, Smilets of Bulgaria, Peter John Olivi, Yang Hui, Otto V, Margrave of Brandenburg-Salzwedel, Albert II, Duke of Saxony, and Thoros III, King of Armenia.