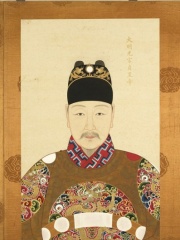 The Taichang Emperor (Chinese: 泰昌帝; pinyin: Tàichāng Dì; 28 August 1582 – 26 September 1620), personal name Zhu Changluo (Chinese: 朱常洛), was the 15th Emperor of the Ming dynasty. He was the eldest son of the Wanli Emperor and succeeded his father as emperor in 1620. However, his reign came to an abrupt end less than one month after his coronation when he was found dead one morning in the palace following a bout of diarrhea. Read more on Wikipedia

Taichang Emperor is most famous for his contributions to the arts. He was a great patron of the arts and encouraged the development of literature, painting, and calligraphy.

Among politicians, Taichang Emperor ranks 1,976 out of 15,710. Before him are François Ravaillac, Adolphe, Grand Duke of Luxembourg, Talal of Jordan, Jürgen Stroop, Ali Abdullah Saleh, and François Darlan. After him are Richard II, Duke of Normandy, King Wen of Zhou, Austen Chamberlain, Maria Luisa of Spain, Babrak Karmal, and Charles III, Duke of Bourbon.

Among people born in 1582, Taichang Emperor ranks 3. Before him are Frans Hals and Gregorio Allegri. After him are Dmitry of Uglich, George, Duke of Brunswick-Calenberg, Giovanni Lanfranco, David Teniers the Elder, Bartolomeo Manfredi, John Frederick, Duke of Württemberg, Archduchess Eleanor of Austria, Sigismondo d'India, and Augustus, Count Palatine of Sulzbach. Among people deceased in 1620, Taichang Emperor ranks 5. Before him are Simon Stevin, Wanli Emperor, Mahfiruz Hatun, and William Adams. After him are Stanisław Żółkiewski, Louise de Coligny, Archduchess Eleanor of Austria, and Thomas Campion.