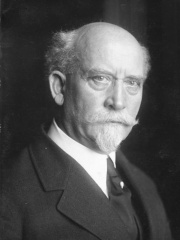 Philipp Heinrich Scheidemann (26 July 1865 – 29 November 1939) was a German politician of the Social Democratic Party of Germany (SPD). In the first quarter of the 20th century he played a leading role in both his party and in the young Weimar Republic. During the German Revolution of 1918-1919 that broke out after Germany's defeat in World War I, Scheidemann proclaimed a German Republic from a balcony of the Reichstag building. Read more on Wikipedia

Philipp Scheidemann is most famous for being the first chancellor of the Weimar Republic.

Among politicians, Philipp Scheidemann ranks 2,209 out of 15,710. Before him are Blanche I of Navarre, Edmund Ironside, Grand Duke Dmitri Pavlovich of Russia, Lamoral, Count of Egmont, Prince Philippe, Count of Paris, and Ladislaus of Naples. After him are Childebert III, John V of Portugal, Alfred, Duke of Saxe-Coburg and Gotha, Ahmose-Nefertari, Berenice, and Valerius Severus.