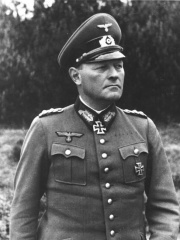 Erich Kurt Richard Hoepner (14 September 1886 – 8 August 1944) was a German general during World War II. An early proponent of mechanisation and armoured warfare, he was a Wehrmacht army corps commander at the beginning of the war, leading his troops during the invasion of Poland and the Battle of France. Hoepner commanded the 4th Panzer Group on the Eastern Front during Operation Barbarossa, the invasion of the Soviet Union in 1941. Units under his command closely cooperated with the Einsatzgruppen and implemented the Commissar Order that directed Wehrmacht troops to summarily execute Red Army political commissars immediately upon capture. Read more on Wikipedia

Erich Hoepner was a German general who was responsible for the death of thousands of Polish civilians in 1939.