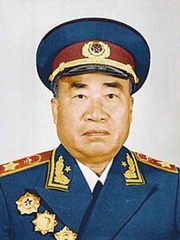 Zhu De (; also Chu Teh; 1 December 1886 – 6 July 1976) was a Chinese general, warlord, politician, revolutionary of the Communist Party of China. Born poor in 1886 in Sichuan, he was adopted by a wealthy uncle at age nine. His wealthy uncle provided him a superior early education that led to his admission into a military academy. Read more on Wikipedia

Since 2007, the English Wikipedia page of Zhu De has received more than 406,765 page views. His biography is available in 39 different languages on Wikipedia making him the 2,157th most popular politician.

Among politicians, Zhu De ranks 2,141 out of 14,801. Before him are Petronilla of Aragon, Blanche I of Navarre, Germaine of Foix, Nigel Farage, August Bebel, and Munjong of Joseon. After him are Guntram, Al-Hajjaj ibn Yusuf, Guillaume de Nogaret, Austen Chamberlain, Leopold, Duke of Lorraine, and Omar Bongo.