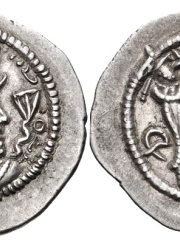 Peroz I (Middle Persian: 𐭯𐭩𐭫𐭥𐭰, romanized: Pērōz) was the Sasanian King of Kings (shahanshah) of Iran from 459 to 484. A son of Yazdegerd II (r. 438–457), he disputed the rule of his elder brother and incumbent king Hormizd III (r. Read more on Wikipedia

Peroz I is most famous for his victory over the Ottoman Turks at the Battle of Chaldiran in 1514.

Page views of Peroz IS by language

Among politicians, Peroz I ranks 2,352 out of 15,577. Before him are Merneith, Isaias Afwerki, Andrés Manuel López Obrador, James III of Scotland, Charles Emmanuel III of Sardinia, and Sergey Bubka. After him are Milan I of Serbia, Cleopatra IV of Egypt, Ptolemy X Alexander I, Manco Inca Yupanqui, Æthelberht, King of Wessex, and Victor Amadeus I, Duke of Savoy.

Among people born in 500, Peroz I ranks 7. Before him are Procopius, Theodora, Pseudo-Dionysius the Areopagite, Totila, Pope Vigilius, and Sigismund of Burgundy. After him are Basiliscus, Nonnus, Yazdegerd II, Ambrosius Aurelianus, Ildico, and Antipope Dioscorus. Among people deceased in 484, Peroz I ranks 2. Before him is Euric. After him are Huneric, Emperor Seinei, Verina, and Placidia.