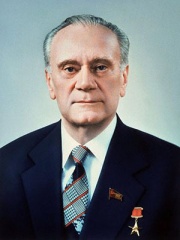 Nikolai Aleksandrovich Tikhonov (Russian: Николай Александрович Тихонов; 14 May [O.S. 1 May] 1905 – 1 June 1997) was a Soviet Russian-Ukrainian statesman during the Cold War. He served as Chairman of the Council of Ministers from 1980 to 1985, and as a First Deputy Chairman of the Council of Ministers, literally First Vice Premier, from 1976 to 1980. Tikhonov was responsible for the cultural and economic administration of the Soviet Union during the late era of stagnation. Read more on Wikipedia

Nikolai Tikhonov is most famous for being the head of the Soviet Union's Council of Ministers and the first Prime Minister of the Russian Federation.

Among politicians, Nikolai Tikhonov ranks 3,056 out of 15,577. Before him are Henry II the Pious, Abdul Rahman Arif, Sancho II of Portugal, Sirimavo Bandaranaike, Chiyou, and Antonio José de Sucre. After him are Jacques Santer, Fernando Henrique Cardoso, Alfonso I of Asturias, György Dózsa, David of Trebizond, and Muhammadu Buhari.