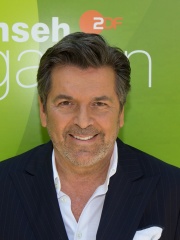 Bernd Weidung (born 1 March 1963), known by his stage name Thomas Anders, is a German singer, songwriter and record producer. He is best known as the lead vocalist of the pop duo Modern Talking.Starting his singing career while still in school, Anders unsuccessfully attempted to establish himself as a Schlager artist for several years. After forming the Eurodisco duo Modern Talking with Dieter Bohlen in 1983, they became a worldwide sensation with their hit "You're My Heart, You're My Soul". They followed up with a string of other hits, namely "You Can Win If You Want", "Cheri, Cheri Lady", "Brother Louie", "Atlantis Is Calling (S.O.S. Read more on Wikipedia

Thomas Anders is most famous for being the lead singer of the German pop group Modern Talking.

Among people born in 1963, Thomas Anders ranks 17. Before him are Ronald Koeman, Sergey Bubka, Till Lindemann, Donnie Yen, Mohammed VI of Morocco, and James Hetfield. After him are Peter Schmeichel, Mikhail Khodorkovsky, Eros Ramazzotti, Rick Rubin, James May, and Alejandro González Iñárritu.