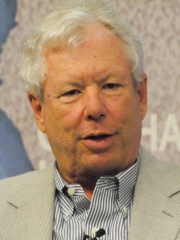 Richard H. Thaler (; born September 12, 1945) is an American economist and the Charles R. Walgreen Distinguished Service Professor of Behavioral Science and Economics at the University of Chicago Booth School of Business. In 2015, Thaler was president of the American Economic Association.Thaler is a theorist in behavioral economics who has collaborated with Daniel Kahneman, Amos Tversky, and others in further defining that field. Read more on Wikipedia

Richard Thaler is most famous for his work in behavioral economics, which is the study of how people's emotions and psychology influence their economic decisions.