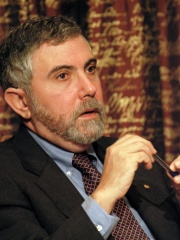 Paul Robin Krugman ( (listen) KRUUG-mən; born February 28, 1953) is an American economist and public intellectual, who is Distinguished Professor of Economics at the Graduate Center of the City University of New York, and a columnist for The New York Times. In 2008, Krugman was the winner of the Nobel Memorial Prize in Economic Sciences for his contributions to New Trade Theory and New Economic Geography. The Prize Committee cited Krugman's work explaining the patterns of international trade and the geographic distribution of economic activity, by examining the effects of economies of scale and of consumer preferences for diverse goods and services.Krugman was previously a professor of economics at MIT, and later at Princeton University. Read more on Wikipedia