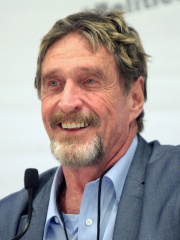 John David McAfee ( MAK-ə-fee; born September 18, 1945) is a British-American computer programmer and businessman. He founded the software company McAfee Associates in 1987 and ran it until 1994, when he resigned from the company. McAfee Associates achieved early success as the creators of McAfee, the first commercial antivirus software, and the business now produces a range of enterprise security software. Read more on Wikipedia

Since 2007, the English Wikipedia page of John McAfee has received more than 5,091,876 page views. His biography is available in 21 different languages on Wikipedia making him the 237th most popular businessperson.