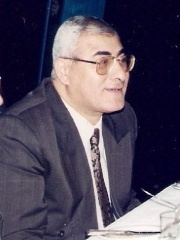 Adly Mahmoud Mansour (Arabic: عدلى محمود منصور pronounced [ˈʕædli mæħˈmuːd mɑnˈsˤuːɾ]; born 23 December 1945) is an Egyptian judge and politician who served as the president (or chief justice) of the Supreme Constitutional Court of Egypt. He also served as interim president of Egypt from 4 July 2013 to 8 June 2014 following the 2013 Egyptian coup d'état by the military which deposed President Mohamed Morsi. Several secular and religious figures, such as the Grand Imam of al-Azhar (Ahmed el-Tayeb), the Coptic Pope (Tawadros II), and Mohamed ElBaradei supported the coup against President Morsi and the military appointed Mansour interim-president until an election could take place. Read more on Wikipedia

Adly Mansour was the Egyptian Supreme Court Judge who was appointed by the military to serve as interim president of Egypt following the removal of Mohamed Morsi from power in 2013.

Among judges, Adly Mansour ranks 5 out of 39. Before him are Deborah, Giovanni Falcone, Roland Freisler, and Paolo Borsellino. After him are Ruth Bader Ginsburg, Fritz Bauer, Zaleucus, Edward Coke, Panagiotis Pikrammenos, Vassiliki Thanou-Christophilou, and John Marshall.

Among JUDGES In Egypt