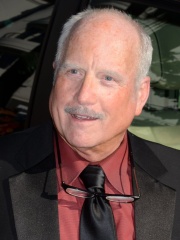 Richard Stephen Dreyfuss (; né Dreyfus; born October 29, 1947) is an American actor best known for starring in popular films between the 1970s and 1990s, including American Graffiti, Jaws, Stand by Me, Close Encounters of the Third Kind, Down and Out in Beverly Hills, The Goodbye Girl, Tin Men, Stakeout, Always, What About Bob?, and Mr. Holland's Opus. Dreyfuss won the Academy Award for Best Actor in 1978 for The Goodbye Girl, and was nominated in 1995 for Mr. Read more on Wikipedia

Since 2007, the English Wikipedia page of Richard Dreyfuss has received more than 6,935,647 page views. His biography is available in 57 different languages on Wikipedia making him the 572nd most popular actor.