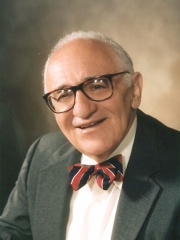 Murray Newton Rothbard (; March 2, 1926 – January 7, 1995) was an American heterodox economist of the Austrian School, economic historian and political theorist. Rothbard was the founder and leading theoretician of anarcho-capitalism, a staunch advocate of historical revisionism and a central figure in the 20th-century American libertarian movement. He wrote over twenty books on political theory, revisionist history, economics, and other subjects.Rothbard argued that all services provided by the "monopoly system of the corporate state" could be provided more efficiently by the private sector and wrote that the state is "the organization of robbery systematized and writ large". Read more on Wikipedia

Since 2007, the English Wikipedia page of Murray Rothbard has received more than 1,075,948 page views. His biography is available in 36 different languages on Wikipedia making him the 70th most popular economist.