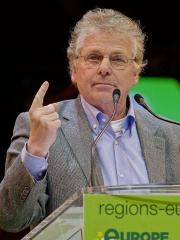 Daniel Marc Cohn-Bendit (French pronunciation: ​[danjɛl maʁk kɔn bɛndit]; German: [koːn ˈbɛndɪt]; born 4 April 1945) is a French-German politician. He was a student leader during the unrest of May 1968 in France and was also known during that time as Dany le Rouge (French for "Danny the Red", because of both his politics and the colour of his hair). He was co-president of the group European Greens–European Free Alliance in the European Parliament. Read more on Wikipedia

Daniel Cohn-Bendit is most famous for his role in the 1968 student protests in France. He was one of the leaders of the student uprising, and he was the youngest person to be elected to the National Assembly.

Among politicians, Daniel Cohn-Bendit ranks 3,482 out of 15,710. Before him are Princess Margaretha, Mrs. Ambler, Princess Antoinette of Brunswick-Wolfenbüttel, Liuvigild, John Corvinus, Marcus Claudius Marcellus, and Sinsharishkun. After him are Shirkuh, Shamshi-Adad V, Oleg Penkovsky, Jehoahaz of Israel, Augustin Robespierre, and Jeanne de Valois-Saint-Rémy.