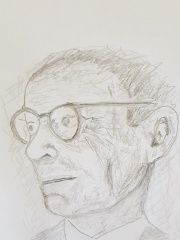 Walter Christaller (April 21, 1893 – March 9, 1969), was a German geographer whose principal contribution to the discipline is central place theory, first published in 1933. This groundbreaking theory was the foundation of the study of cities as systems of cities, rather than simple hierarchies or single entities. Read more on Wikipedia

Walter Christaller is most famous for his Central Place Theory. This theory states that people will travel to a central place to buy goods, and that the size of a town will be determined by the size of the market it can provide for.

Among politicians, Walter Christaller ranks 3,470 out of 15,710. Before him are Gérard Genette, Peter I of Bulgaria, Rusudan of Georgia, Marie Angélique de Scorailles, Muyeol of Silla, and Sancho VI of Navarre. After him are Félix Houphouët-Boigny, Ahmose, Bruno Kreisky, Tokugawa Tsunayoshi, Traian Băsescu, and Princess Margaretha, Mrs. Ambler.