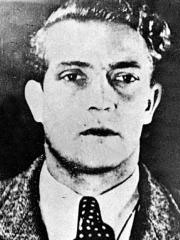 Gustav Franz Wagner (18 July 1911 – 3 October 1980) was an Austrian member of the SS with the rank of Staff sergeant (Oberscharführer). Wagner was a deputy commander of Sobibor extermination camp in German-occupied Poland, where 200,000-250,000 Jews were murdered in the camp's gas chambers during Operation Reinhard. Read more on Wikipedia

Gustav Wagner was a Nazi SS officer who served as the commandant of the Nazi concentration camps at Auschwitz and Majdanek.

Among military personnels, Gustav Wagner ranks 400 out of 1,466. Before him are Archduke Leopold Wilhelm of Austria, Thomas the Slav, Alexander von Falkenhausen, Josef Harpe, Gao Shun, and Georg-Hans Reinhardt. After him are Ernst von Mansfeld, Nikolai Kuznetsov, Yoshiko Kawashima, Alfred I, Prince of Windisch-Grätz, Sergey Sokolov, and John of Austria the Younger.